Motivate Me: Startling Truths about Human Motivation
Toastmasters Speech Number 5: “Your body Speaks”
“Why do you work?”

Tonight I am going to show you some scientific studies and research that will shock you about the biggest thing you know about work.

This- if driven by Dollars

If you are Driven by Pesos 🙂

I. Our Assumption: Money
It starts from this Assumption that most of us have. We assume that people work for Money, first and then for a lot many other reasons, such as passion, family etc. But it all boils down to money.
Psychologists in the 1940s believe that “Men are motivated by money as an incentive.” This also reflects the Industrial Age’s system of work: “If you want people to work, give them incentives.” From this reasoning we can deduce that Rewards is equal to motivation.
Now scientists have been studying human behavior and have found a startling fact. Something that is contrary to our commonly held assumptions.

II. The Tests. Reward and Motivation

Professors at MIT, Economic Researchers from the Federal Reserve Bank conducted this experiment on MIT Students, University of Michigan and Carnedie-Melon University.
The tasks involved memorizing digits, throwing a basketball through a hoop and special puzzles. There were 3 kinds of rewards: small, medium and large results.
These are their findings:
1. “As long as the results involved Mechanical Skills, bonuses” which I fondly call bonii, 🙂 “and rewards worked. Better rewards meant better results.”
2. But “As the work involved complicated – even for rundimentary cognitive skills, a larger reward led to poorer performance.” 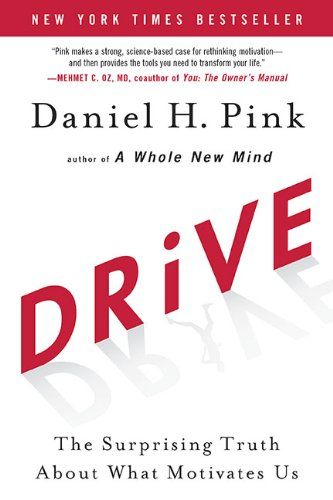 Drive - the Truth on What Motivates US - by Daniel Pink-

Daniel Pink, in his book “What Drives Us” summarizes it: bigger rewards equals bigger motivation on simple tasks but anything that involved any kind of thinking equals poorer performance.

III. Motivation Factors – What Really Drives Us.
Daniel Pink states that Financial Incentives can have Negative Impact on Overall Performance. The reason is that rewards narrow downour focus. It also restricts our thinking. We are left thinking about money and not the work.

Fact: Money is still a motivator. People might not work if they are not paid fairly. But Daniel Pink says that “People should be paid enough so that they don’t worry about money.” After that other motivators are the real drivers.

In the book Intrinsic Motivation at work, the author describes 3 key motivators: Autonomy, Mastery and Purpose.

Autonomy. People want to be self directed.
The Call Center annual turnover rates in the US is 100%. This is routine work where people are monitored and timed. Zaphos, a leading Call Center called all its employees told them ” We’ll give you $300 dollars if you leave now, but if you don’t, go back to your cubicles, arrange it anyway you want but when a call comes in ‘Solve the customers problems.'” This change made them the Call Center with the lowest turnover in the US.

Mastery. The Personal, Compelling Drive to become Better.
Today we have a free Operating System, Linux, operated by excellent programmers and offered for free. It now competes with windows. It is what they call Open Source software.

And why do you think a bunch of kids and adults go home and continually practice their guitars on the Weekends?

Purpose. We want to be part of something bigger than ourselves.
One factor in Motivation is where people offer themselves to serve the world. Some of them may not even be paid fairly but these heroes are changing the World Today.

Conclusion
The Secret to High Performance is not limited to Money but is dependent on understanding yourself and other people’s drive for Creativity.