The Company Motorola Inc., was one to develop the Strategy in the 1980’s and provided Six Sigma training and Consultancy services. They Described Six Sigma as “At Motorola, we think about Six Sigma at three different levels: 1. As a Metric, 2. As a Methodology, 3. As a Management System. Essentially, Six Sigma is all three at the same time.” 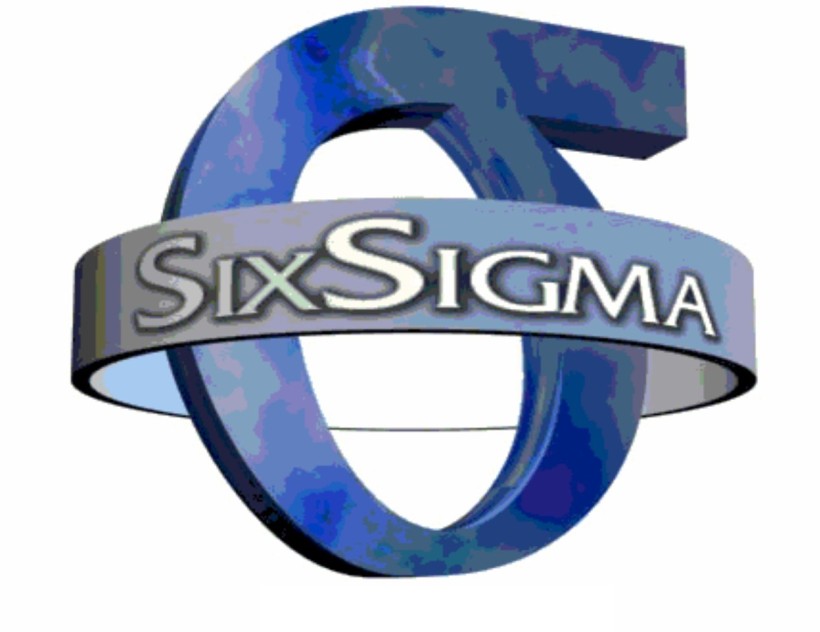 I. Six Sigma as a Metric.

The term “Sigma” is often used as a scale for levels of quality for a product. Examples for this, using ‘Six Sigma’ is “6 defects per one million opportunities” (DPMO). Six Sigma started as a defect reduction effort in manufacturing and was then applied to other business processes to improve those businesses.”

II. Six Sigma as a Methodology

As the philosophy evolved, Six Sigma placed less emphasis on the literal definition of 6 DPMO, or counting defects in products and processes. Six Sigma became known as a business improvement methodology that focuses an organization on:

The DMAIC is a model for process improvement. The Acronym DMAIC commonly used by Six Sigma project teams stands for :

Through experience, Motorola has learned that disciplined use of metrics and application of the methodology is still not enough to drive desired breakthrough improvements and results that are sustainable over time. For greatest impact, Motorola ensured that process metrics and structured methodology are continuously applied to improve opportunities. Six Sigma is a high performance system for executing business strategy.

Six Sigma is a top-down solution to help organizations:

The Six Sigma Management System drives clarity around the business strategy and the metrics that most reflect success with that strategy. It provides the framework to prioritize resources for projects that will improve the metrics, and it leverages leaders who will manage the efforts for rapid, sustainable, and improved business results

General Electric (GE), the first large-scale adopters and advocates of Six Sigma after Motorola, and considered by most experts to have been responsible for Six Sigma’s rapidly achieved high profile, provide the following definitions of Six Sigma:

Six Sigma according to General Electric

Six Sigma is a highly disciplined process that helps us focus on developing and delivering near-perfect products and services.

Why ‘Sigma’? The word is a statistical term that measures how far a given process deviates from perfection. The central idea behind Six Sigma is that if you can measure how many ‘defects’ you have in a process, you can systematically figure out how to eliminate them and get as close to ‘zero defects’ as possible. To achieve Six Sigma Quality, a process must produce no more than 3.4 defects per million opportunities. An ‘opportunity’ is defined as a chance for non-conformance, or not meeting the required specifications. This means we need to be nearly flawless in executing our key processes

At its core, Six Sigma revolves around a few key concepts like:

Critical to Quality: Attributes most important to the Customer

The Six Sigma according to I6Sigma Organization

The Isixsigma Organisation is the biggest online ‘community’ of Six Sigma Practitioners. Isixsigma provides the following definition of Six Sigma

“Six Sigma is a rigorous and disciplined methodology that uses data and statistical analysis to measure and improve a Company’s Operational Performance by identifying and eliminating ‘defects’ in Manufacturing and service-related processes. Commonly defined as 3.4 defects per million opportunities, Six Sigma can be defined and understood at three distinct levels: metric, methodology and philosophy…” July 2005.

You will gather from the definitions and history of Six Sigma that many people consider the model to be capable of leveraging huge performance improvements and cost savings.

None of this of course happens on its own. Teams and team leaders are an essential part of the Six Sigma methodology.

Six Sigma is therefore a methodology which requires and encourages team leaders and teams to take responsibility for implementing the Six Sigma processes. Significantly these people need to be trained in Six Sigma’s methods – especially the use of the measurement and improvement tools, and in communications and relationship skills, necessary to involve and serve the needs of the internal and external customers and suppliers that form the critical processes of the organization’s delivery chains.

Training is therefore also an essential element of the Six Sigma Methodology, and lots of it.

When an organization decides to implement Six Sigma, first the executive team has to decide the strategy – which might typically be termed an improvement initiative, and this base strategy should focus on the essential processes necessary to meet customer expectations.

This could amount to twenty or thirty business process. At the top level these are the main processes that enable the organization to add value to goods and services and supply them to customers. Implicit within this is an understanding of what the customers – internal and external – actually want and need.

A team of managers (‘Black Belts’ normally) who ‘own’ these processes is responsible for:

identifying and understanding these processes in detail, and also understanding the levels of quality (especially tolerance of variation) that customers (internal and external) expect, and then measuring the effectiveness and efficiency of each process performance – notably the ‘sigma’ performance – ie., is the number of defects per million operations (pro-rate if appropriate of course).

The theory is entirely logical: understanding and then improving the most important ‘delivery-chain’ processes will naturally increase efficiency, customer satisfaction, competitive advantage, and profitability.

Easily said – tricky to achieve – which is what the Six Sigma methodology is for.

Most practitioners and users of Six Sigma refer to Motorola’s early DMAIC acronym (extended since to DMAICT) as a way of reinforcing and reminding participants what needs to be done:

Motorola emphasizes that in order for Six Sigma to achieve ‘breakthrough improvements’ that are sustainable over time, Six Sigma’s ‘process metrics’ and ‘structured methodology’ must be extended and applied to ‘improvement opportunities’ that are directly linked to ‘organizational strategy’. It is difficult to argue with the logic. There is little point in measuring and improving things that have no significant impact on the strategically important organizational processes.

Six Sigma team leaders (Black Belts) work with their teams (team members will normally be people trained up to ‘Green Belt’ accreditation) to analyse and measure the performance of the identified critical processes. Measurement is typically focused on highly technical interpretations of percentage defects (by a which a ‘sigma’ measurement is arrived at – see the one-to-six sigma conversion scale below), and a deep detailed analysis of processes, involving organizational structures and flow-charts. Many other tools for performance measurement and analysis are used, for example the ‘balanced scorecard’ method, and ‘process mapping’, etc., depending on the processes and systems favoured by the team leaders and project statisticians, and what needs to be measured and analysed. Six Sigma does not stipulate specifically what analytical methods must be used – the organization and particularly the team leaders decide these things, which is why implementation and usage of Six Sigma varies so widely, and why Six Sigma will continue to evolve. Any analytical tool can be included within Six Sigma implementation.

Six Sigma experts and commentators commonly refer to typical failure rates of organizations that have not put particular pressure on their quality performance levels. Aside from anything else this at least helps to put the ‘Sigma’ terminology into a simpler mathematical context:

It is said that many ordinary businesses actually operate at between three and two and sigma performance. This equates to between approximately 66,800 and 308,500 defects per million operations, (which incidentally is also generally considered to be an unsustainable level of customer satisfaction – ie., the business is likely to be in decline, or about to head that way). Bear in mind that an ‘operation’ is not limited to the manufacturing processes – an ‘operation’ can be any process critical to customer satisfaction, for example, the operation of correctly understanding a customer request, or the operation of handling a customer complaint. Six Sigma is not restricted to engineering and production – Six Sigma potentially covers all sorts of service-related activities. What matters is that the operation is identified as being strategically critical and relevant to strategy and customer satisfaction.

A measurement of four sigma equates to approximately 6,200 DPMO, or around 99.4% perfection. This would arguably be an acceptable level of quality in certain types of business, for instance a roadside cafe, but a 99.4% success rate is obviously an unacceptable level of quality in other types of business, for example, passenger aircraft maintenance.

A measurement of five sigma equates to just 233 defects per million opportunities, equivalent to a 99.98% perfection rate, and arguably acceptable to many businesses, although absolutely still not good enough for the aircraft industry.

You can see from the conversions above that the sigma scale is exponential. The difference between the DPMO equating to each whole number more than doubles as you move up through the scale. By my rough calculation, ‘seven sigma’ would equate to about 2 defects per 100 million opportunities (correct me if I’m wrong), which is perhaps a little over-demanding even for the aircraft industry, and that’s perhaps why nobody bothers much with anything over six sigma.

Motorola and many other devotees of Six Sigma are increasingly at pains to point out that Six Sigma is nowadays far less concerned with the mathematical theory of the Sigma calculations, and a lot more concerned with the model’s broader performance improvement methods, nevertheless, Six Sigma’s complexity and variable interpretations are not helped by the difficulty in penetrating the original mathematical reasoning behind the essential Six Sigma metric: just exactly why does Six Sigma equate to 3.4 defects per million? What are the calculations which take us from 3.4 PPM (parts per million), ie., 0.0000034%, to ‘Six Sigma’? Mathematical interpretations vary apparently. (If you can explain this in simple language, and less than a couple of hundred words, please do, and I’ll gladly add the explanation to this page).

Here is a suggested Six Sigma elevator speech (thanks Steven, Jun 2010): “Sigma is the symbol of standard deviation, a measurement of deviation of a sample from the population average. Each sigma you depart from the average, the event, in this case failure, becomes more an more improbable. At 6 sigma, the probability is about 3.5/million. But this is just the statistical side of Six Sigma. The bulk of the work in a Six Sigma project would be in defining failures, measuring deviations, and other activities which ultimately lead to product quality. In fact, Six Sigma is used as a term for a management style, with the ultimate goal of high levels of customer satisfaction.”

The Six Sigma model may or may not be the most popular ever, but ultimately – as with any business methodology – it may outgrow its use.

I am a Search Engine Optimization Professional from Bacolod City with a Knack for finding our way to the top of the Search Engines.

One thought on “Marketing: Wisdom of Understanding Six Sigma”