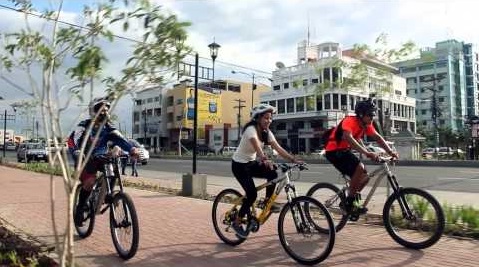 Humans have been walking for thousands of years. Since man started to walk, he has discovered its therapeutic ability to calm one’s emotion, to regulate blood circulation and maintain balance for the body. It is a journey, an activity enjoyed in isolation or in fellowship with friends and family.

As cities grew into urban settlements, the availability of open urban spaces has been threatened by the necessity of commercial activity. The increasing demand for services and goods resulted in the Industrial Revolution. And as earnings and production was the focus, it wiped out the remaining open space in major cities in Europe. As the cities’ greed for more economic prosperity, people’s health and well-being were compromised. Only the rich upper class could afford to have gardens and so the disappearance of the Urban Public Space. With the mass production of cars, people began to walk less and do “office” jobs – managing production.

This events happened in the 18th Century! Fast forward to the 21st Century.

Conurbation in the Cities of the Philippines

The Philippines and the Third World Nations in Asia and South America in the past have been updating their culture to compete with the countries in Europe and the US. Yet the appreciation for the past on WHY we need Urban Public Spaces are sometimes taken for granted in exchange for economic activity. As it is, the movement of cities is to compete economically while its citizens are living in

3D Aerial View of the Diversion Road in Iloilo

The Philippine Plazas and Iloilo

When the Spanish introduced settlements, they transformed the scale of communities – from the smaller barangay to the modern core of future cities – the Plazas. Plazas became the center of city life. It was where the people gathered, surrounded by the Cathedral, the Municipio, the Escuela (Schools) and the Provincial Capitol.

This same grid pattern became the basis for the layout of Iloilo, which was one of the oldest cities in the Philippines in the Pre-Spanish Period. Iloilo came to be known as the Queen of the South because of its standing. But as buildings were laid out during its development, the smaller road networks of Iloilo became a hindrance to the smooth floor of traffic in the city. Road networks and transportation is like the lifeblood of the city, where traffic and congestion can be likened to symptoms of “sickness”.

The expansion of road networks in a city is a never ending quest. As cities grow more and more into Mega-Cities, cities of more than 20M Population, the provision of public mass transport becomes even more useful. In the case of Iloilo, the road networks from the time it was built may never be expanded to the point of delivering the demand for transportation. On the other hand, only the working segment of the population and car owners will benefit from the road. And the former only through satisfying the basic need of getting to the office.

In a sense, the expansion of more roads will be expensive and yet insufficient considering the growth of the city. On the other hand, there is another proposal – to give people another reason to use the road – walks and bike trails. This does not meet the financial and economic need of people, they will find through necessity, but instead, it gives them a space to live, to enjoy and to celebrate being human and living in the city where they live.

I hear that some people have opinions stating that money spent in urban open spaces are better put into roads and infrastructure. I am aware that biking and jogging trails have physical impact on economic activity – compare a 3 meter (1 car lane) to a 3 meter bike trail. The car lane will increase significant traffic around the city in cars/ minute while the bike trail may not be used for the meantime. But what it contributes is a tug, a push that we Ilonggos value you, the citizens of Iloilo and want you to walk together with your family, community, friends. It also gives a statement that Iloilo is not just a city with roads, all other cities have that. It speaks a different message – we are the only city in the Philippines, outside Metro Manila, that values our citizens to provide them an avenue to come together, not for work but for community.

The views expressed on this website are those of the author named. If there are any misrepresentation, please comment below and we will respond as soon as possible.

Arch. Ian Jay Bantilan is an Architect and former Professor in an Architecture College. He is currently taking his Masters in Mapua Graduate School of Architecture.