Who is This Man who Controls the Storm? 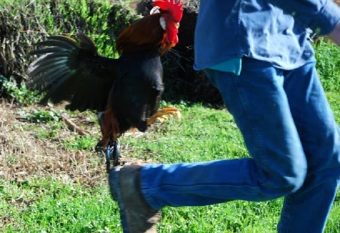 . . . at the far end of the garden (of dirt, banana and ipil ipil trees) lived “The Great Rooster”. Many times my nannies thanked him because he strikes fear so ‘I do not go out and play at my friend’s house. The Rooster would flex its chest over my own territory. When I reclaim my place, he would power-peck and flying-scratch everyone who challenges him, especially me. This rooster also had some “chicks” and would lay very large eggs – double and sometimes triple yolk. Those would be our breakfast. I would hold aluminum “swords” – scraps from broken windows to challenge his authority. END_OF_DOCUMENT_TOKEN_TO_BE_REPLACED